The Orion Cooker Table is the perfect companion for your Orion Cooker. Constructed out of stainless steel.

NOTE: THIS PRODUCT ONLY WORKS WITH THE ORIGINAL ORION COOKER.  IT DOES NOT FIT THE LARGE OR SMALL ORION COOKER

I purchased the Cooker Table and what a nice item to have. It's like having an extra set of hands there when a real second set of hands isn't available.

This cooker was left outside at our family farm that was abandoned between 15 and 20 years ago. My cousin told me about it after he had bought a new one, so I went out and got it gave it a spit shine and it works perfectly. There was not a bit of rust on it. The only thing I had to do was to buy a few accessories for it that could not be found at the farm. It still looks just as good as the new one he bought a year ago. The first thing we tried was a 12 pound turkey. I was amazed that it was completely cooked within one hour and 45 minutes. It was by far the best turkey I’ve ever had. The second thing we tried was a 9 pound Boston butt that was boned prepped and wrapped. What can I say the prime rib of pork. Out of this world! I don’t like using charcoal because I hate cleaning up the ashes, but with this cooker it’s a lot easier than a grill. Many more recipes I want to try. I would suggest this cooker to anyone. Wish I would’ve known about it along time ago. Thank you

I’ve ever had rolled off my new Orion cooker. The smoke flavor was awesome, the meat was moist and tender - if you love BBQ - this cooker is a must-have! 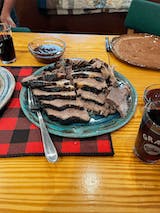 Made a 9lb brisket turned out great!